I am pleased to announce that my second novel, The Crow's Nest, is now available at Barnes & Noble and Amazon.  Please join my newsletter below for updates.​ 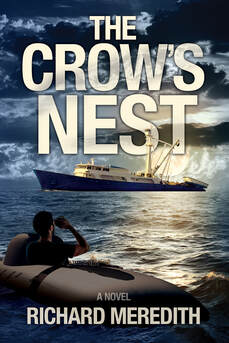 ​The mutant spawn of Savages and Das Boot, The Crow's Nest is a unique tale of crude submarines in drug trafficking. It is a crime thriller without police, federal agents, or the military, just two men seeking their own justice against a brutal cartel.

Chase Brenner, a crewman on a commercial tuna seiner, barely escapes death after his boat and its crew are destroyed by el Hermandad—a sinister cartel hell-bent on eliminating all witnesses to its unique submarine smuggling operation. After surviving an arduous voyage in a flimsy boat, he seeks answers and a little retribution. Hot on the trail for clues, Chase rescues Jonny LeBeau, a Louisiana shrimper forced into smuggling by the cartel but now on its hit list after skimming drugs. When the cartel discovers Chase survived the sinking of the fishing boat and a witness is on the loose, both men are now in its crosshairs.

In a desperate gambit to bargain for their lives, Chase and Jonny hijack a narco-submarine with ten tons of cocaine. The secrecy of the cartel’s billion-dollar enterprise hinges on silencing this dubious pair of extortionists. Jonny, though, proves he’s as cunning as the cartel’s most savage sicario. But the cartel plays its trump card and Jonny faces the moral dilemma of his life—ditch Chase, the man who saved him, and escape with riches beyond his wildest dreams or lose it all and, maybe, his life to ransom Chase’s wife and children after they’re kidnapped by the cartel.

Go To Moonshine Cove
What They're Saying About The Crow's Nest

"The Crow’s Nest is a gritty tale of life and terror on the open sea, of camaraderie, friendship and betrayal, a sobering narrative about the ugliness of life and the cruelty of man—all in the service of the almighty dollar. But it is also a satisfying story of revenge, redemption and justice at last delivered.”—Randy Overbeck, author of Blood on the Chesapeake, Gold Award-Winner from Literary Titan
“This taunt tale of duplicity in the money-rich world of drug smuggling will keep you reading into the night. Meredith bring his background in marine biology to this saga of men who work on the water, both legally and illegally and lets the reader feel the danger and tension of the drug cartels’ violent and deadly business. I loved it!”—Michele Drier, author of the Amy Hobbes Mysteries and The Kandesky Vampire Chronicles

"The Crow's Nest is filled with rich language and breathtaking scenes. Richard Meredith will have you turning the pages in this exciting thriller from the beginning to the satisfying conclusion."—Barry Finlay, Author of The Marcie Kane Thriller Collection

“An improbable hero teams up with a wily sea captain to bring down a dangerous drug cartel. A nail-biter climax will keep you guessing whether they will survive. Don't miss this fast-paced adventure.”—Catherine Coulter, DEADLOCK

"THE CROW'S NEST is a frenetic high seas romp, full of explosions, bar stool deals, and dastardly double-crosses. One moment, I felt like I was reading a Clive Cussler maritime adventure, and the next, I was in the dark, gritty world of Don Winslow. Meredith writes crackling dialog and spins out colorful secondary characters with ease and skill."—Jeff Bond, author of The Winner Maker and Blackquest 40

“Hang on tight as you plunge into this fast-paced thriller that sweeps the reader on a hair-raising ride. You’ll be holding your breath until the last page. Hop on board and enjoy!”—Alexandra Ivy, New York Times Best Selling Author"

“Don Winslow by way of Clive Cussler, THE CROW’S NEST is a fast-paced, action-packed David v. Goliath tale, on land and sea. As terrifyingly intense as a drug runner’s voyage in a homemade minisub, with just as uncertain a conclusion. As far as thrillers go, this is literary cocaine.”—Owen Laukkanen, author of Deception Cove

“Richard Meredith's The Crow's Nest is nonstop action on the high seas, and under them. Narco submarines mix with commercial fishing fleets and drug cartels in a story of deception and betrayal that will keep you wondering as you turn the pages. Some of the bad guys aren't quite as bad as they first appear, but some are worse, much worse. Chase Brenner, Navy vet, must cross over onto the wrong side of the law if he is ever to see his family again.”—Ross Carley, author of the Wolf Ruger Thrillers.